The relay box is located on the passenger side of the engine bay, right next to the coolant reservoir. Close up of the relay box. Notice the Fog Light relay is marked. In front of the relay box is the coolant reservoir. Remove the coolant reservoir by removing the two hex head screws. You can use a large Philips head screwdriver or a 10mm socket. Place the reservoir out of the way. I put it in between the engine and the radiator, it’s sits there without disconnection the hose. Remove the top of the relay box. This is easy, there are only a few clips to undo. Put the top on the side. > Now you can see the relays.
The three relays highlighted in yellow need to be remove in order to remove the relay box. I believe if you have a manual transmission that there is a forth relay that needs to be removed (it would be in the upper right of the relay box)
**These relays should all be the same, but just in case make sure you remember where they originally were.**
This is what the box looks like with the relays removed. Turn the lights on and test the relay with the voltmeter (or other electrical device). The marked terminal should give around a +12V reading. You can use the terminal across from it as the ground. The two hex head screws need to be removed. You can use a large Philips head screwdriver or a 10mm socket. Once the relay box is remove from the frame, it need to be taken apart. There is an upper and lower piece. In order to take it apart there are three clips on the side that faces the engine and two of the same clips on the fender wall side. But on the fender wall side there are also two additional clips. I used a small screwdriver to unlatch all the clips, be careful not to break anything. All the clips are marked in the two pictures above. Here is a picture of the two pieces of the relay box apart. With the relay box open, you want to locate the +12V terminal of the Fog light relay. It’s the green/yellow wire. I’ve marked it with an arrow and outlined it in yellow. You want to cut this wire, make sure to leave yourself enough wire on the relay side of the wire to splice into. Once the wire is cut, tape off the +12V wire with electrical tape (this is the half of the wire that isn’t attached to the relay) ^^WIRE TAP^^ (Radio Shack). Splice into the green/yellow wire with a long wire, around three feet. I used a wire tap to do this, but it can be done in other ways. Make sure to wrap it with enough electrical tape. The new long wire needs to be run out of the relay box. So I cut a small hole in the bottom to run the wire out of. You can also see in the picture the original +12V wire that is cut and wrapped in black electrical tape. Put the relay box back together.
Reattach the box to the car with the two hex head screws.
**To test the lights: Turn on the parking lights, then touch the new wire to the positive terminal (RED) of the battery. The fog lights should turn on when the wire touches the battery. They should also remain on with the high beams.*** Remove the corner light with a screwdriver (wrap with a cloth to protect the lenses), it should pop right out. Run the wire through the fender wall to the corner light. Splice the new relay wire into the red/blue wire. Again, I used a wire tap and then wrapped the entire thing with lots of electrical tape. Push the lenses back into the bumper.
YOUR DONE!!!
Turn the parking lights on and make sure the fog light switch is on too. Now your fogs will also be on. Turn on your headlights with your high beams on, your fog lights will remain on. 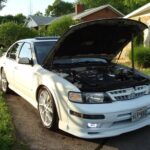 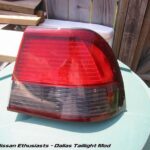