Imagine seeing this car lined up at the track.  At almost 20 years old and reconciled to shuffling grandma back and forth to church, most people don’t view a 1997 Maxima as a car that is a threat, or even a car that belongs at a drag strip.  Add on top of that the fact that it has an automatic transmission, and you are likely to incite more than a few laughs.  Abdala Fernandez, the owner and builder of this car, doesn’t care who is laughing at the beginning of the track, he is more concerned with who is laughing at the end, and more often than not, it’s him. If the giant intercooler wasn’t a dead give-away, once you pop the hood you start to realize that this is a car that is very different from the stock 190whp grocery-getter Nissan designed.  The engine was swapped with a more powerful and lighter VQ35DE.  If that code looks familiar to you that is because it is the same engine code that you find in a 350z, just a front wheel drive version.  The bottom end is built with ACL HX bearings, and Eagle H beam rods matched with Weisco 8.8:1 Pistons. A Nissan Rev Up oil pump replaces the stock for more reliable oiling, and the 3.5 block has been bored slightly to 96mm.  The head bolts are stolen from a Nissan Juke, the headgasket is from a Vq35hr, the higher revving cousin of the VQ35DE.  This combo keeps the all-important contact between the head and the block going strong even under relatively high amounts of boost pressure.  The heads have been modified as well, VQ35HR valve springs replace their OEM counterparts and the valves have been lapped and adjusted by Abdala by grinding the buckets by hand.  An NWP torque link connects the engine to the actual frame of the car, reducing engine movement. The intake manifold has been replaced with a MotorDyne MREV2, this was then modified with a Methanol/Water (50/50) dual nozzle injection, a Hobb pressure switch dictates when the methanol is released.  A MotorDyne 5/16 inch spacer separates it from the warmer lower intake manifold, and a NWP lower intake manifold spacer keeps the high heat of the engine block at bay.  This is a tried-and-true technique of using spacers to reduce intake air temperatures, and to distribute air through the pistons more effectively.

An Aeromotive A1000 fuel pressure regulator keeps the fuel flowing correctly from the trunk mounted fuel cell.  In addition to fuel, the fuel system is, as you can imagine, big.  1000cc Injector Dynamics fuel injectors mounted in an OBX fuel rail, pushed by a 450lph Walbro fuel pump gives this engine all the high-octane fuel it needs.  Abdala decided to score the injection “hat trick” and get nitrous on board as well.  A DynoTune nitrous system provides an 80whp wet shot of nitrous.  From a dig this helps spool the large turbo faster, and is the primary purpose for using the giggle gas.  Alternatively, should he deem it necessary, Emanage can let loose nitrous for the entire ¼ mile run. The turbo is a BorgWarner S366 T4 Single Scroll .88AR pushing up to an impressive 21 pounds of boost, a Tial 50MM with a 15psi spring keeps the extra air venting into the atmosphere.  Because of its mounting position, the radiator has been replaced with a much smaller 2 core radiator out of a Del Sol.  A Treadstone Performance TR1035 intercooler keeps the compressed air chilled and dense.  Controlling all this madness is a Greddy Emanage Ultimate that is hooked into a Turbosmart boost controller via a Mac Solenoid for a custom electronic boost control set up. Tuning this creation is done by none other than Abdala himself.  Also, a J&S Ultra safeguard with matching knock gauge keep the engine safe by detecting even the faintest knock and disabling that specific cylinder until it can behave again.

The turbo manifolds are custom built by Abdala, and wrapped in titanium to help fight under hood temperatures. The car uses two downpipes, one used for the track which is a 3.5inch short pipe that exists the hood, hence the holes in the hood. For the street, a custom down pipe that routes to the back of the car then comes out of the passenger side rear door with a custom muffler that is based on a Dynomax VT.  This has baffling inside that is very quiet when there is slow airflow, once an increase in airflow occurs the flaps open and it becomes a straight through muffler. The taboo automatic transmission is a stock 4 speed Maxima Automatic with an EdgeRacing Highstall Converter, (3500 stall) and a IPT Performance Transmissions valvebody upgrade.  A TRU-COOL MAX LPD47391 transmission cooler with two generic fans mounted on it is installed to keep the transmission cool. The cooler is mounted in stock gas tank position, hence the trunk mounted fuel cell.  The transmission is controlled by SupraStick v4, which is a standalone transmission control module.  A custom “manual shifter” which is a rod that sits near his right hand by the factory shifter allows him to easily pull on the rod to up shift, and push on it to downshift.  He also has a switch that sets the transmission to automatic mode for normal driving.  The TCM is also partly responsible for controlling the nitrous, when a shift is initiated it turns off the nitrous during the shift then activates it again in the next gear, this helps take load off the transmission and allows for easier shifts. The suspension is handled by Tokico Illumina’s set to the firmest setting for improved launches. The front and rear springs are progress.  A progress rear sway bar keeps the car from getting out of line.  In keeping with the understated visuals, the wheels and tires are 17 inch rims from a 2002 Titanium Edition Maxima.  When he goes to the track a set of Mickey Thomson 24.5×8 slicks grace the front end of the car.  Hawk Hp+ brake pads are the only braking upgrade this sleeper needs. The results of all this work and fabrication pay off with a blistering 11.326 second quarter mile time and a very respectable 127.15 mph trap speed.  Abdala admits that he is happy with the time, but won’t be satisfied with the build until he cracks the ten second mark.  With the amount of time and effort put into this car, it is just a matter of time until this sleepy old grocery getter achieves that goal, drops some jaws, breaks some hearts, and gives Abdala his last laugh.  If you want to follow this car and see it in action, check out Abdala’s appropriately named Instagram “Streetzlegend.” 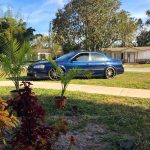 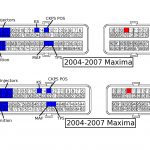