Alright, after tons of research on this subject, it would seem as though it is almost IMPOSSIBLE to actually complete the 95/96 to 97-99 steering wheel swap without any troubles. Of course, there are some, but the swap is actually fairly easy once you know what’s going on.

For those of you who have thought about trying this swap, it truly is fairly easy. I know many have run into problems and thought the only way to make this swap work was to replace more than just the steering wheel, but here is your way around it.

Alright, once everything is gathered together, you are ready to start.

**Before going any further, DISCONNECT THE BATTERY**

Removing the steering wheel from the 95/96

Start by removing the plastic trim around the cruise control and the plastic door on the left-hand side of the steering wheel. Once removed, take a look and you’ll see two T50 security Torx bolts holding the airbag in place. Use the T50 security Torx bit along with your socket wrench to remove these two bolts. Once removed, pull gently on the steering wheel airbag, turn over, and disconnect the airbag wire harness. Set the airbag aside.

Once removed, you should now see the clockspring.

We will now be underneath the dash and steering wheel.

Remove the fusebox door, and the entire thigh cover around the fuse box underneath the dash. Once removed, you should see a metal brace below the steering wheel. Remove this. Now, you should see 6 holes with Philips screws holding the black plastic around the steering column in place. Use a 4″ Philips screwdriver and remove all of these screws. The black plastic should now pop off, and expose the steering column, and the screws holding the clockspring in place. Before doing anything else, try to place the new steering wheel on the hub.

So, for this writeup, we will be using the original 95/96 clockspring.

Remove the 4 screws holding the clockspring in place. Disconnect the clockspring harness underneath the steering wheel. Once removed, you can now test the fitment of the 95/96 clockspring to the 97/99 steering wheel. Line up the plastic square (the one where the wires are coming out of), with the square-ish hole on the backside of the wheel. As you can see, it ALMOST fits, but not quite. And, you’ll notice that hole for the nub on the clock spring is a little off. Here is where we do a little modification. 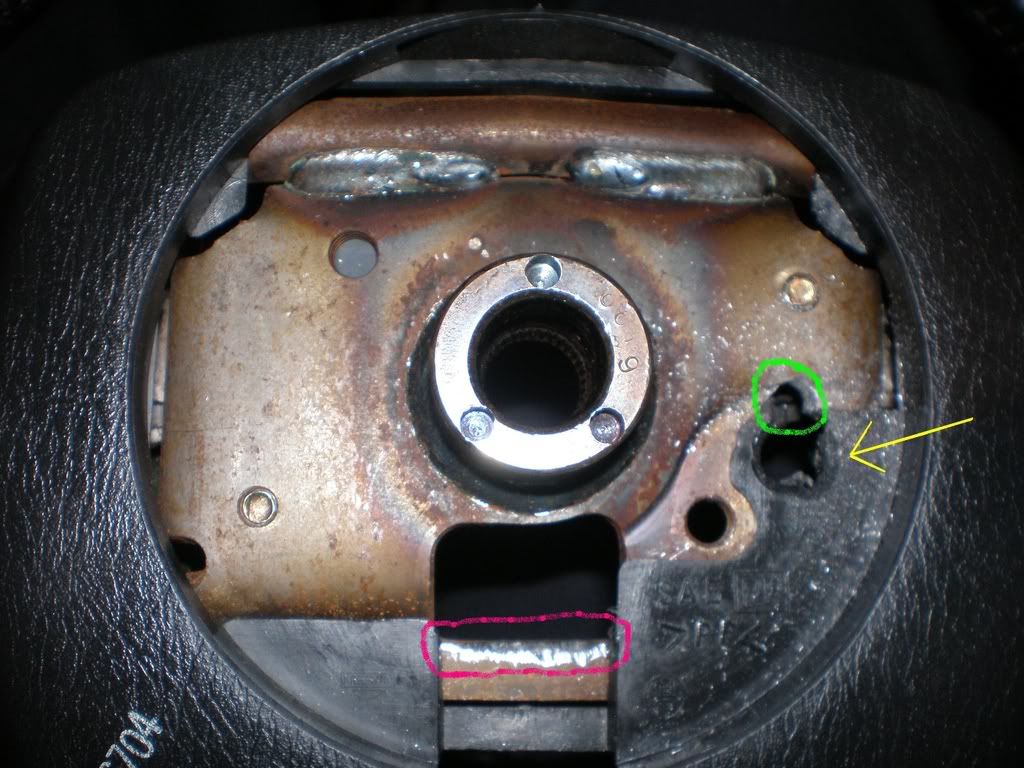 The 95/96 nub we are drilling a hole for is circled in green, also take note of the blue trim ring around the hub. There are little pegs that will line up on the back of the shaft of the actual steering wheel. You will need to rotate this so that the steering wheel shaft holes line up with the pegs. When rotating the blue ring, make sure you keep the black square in the down position. 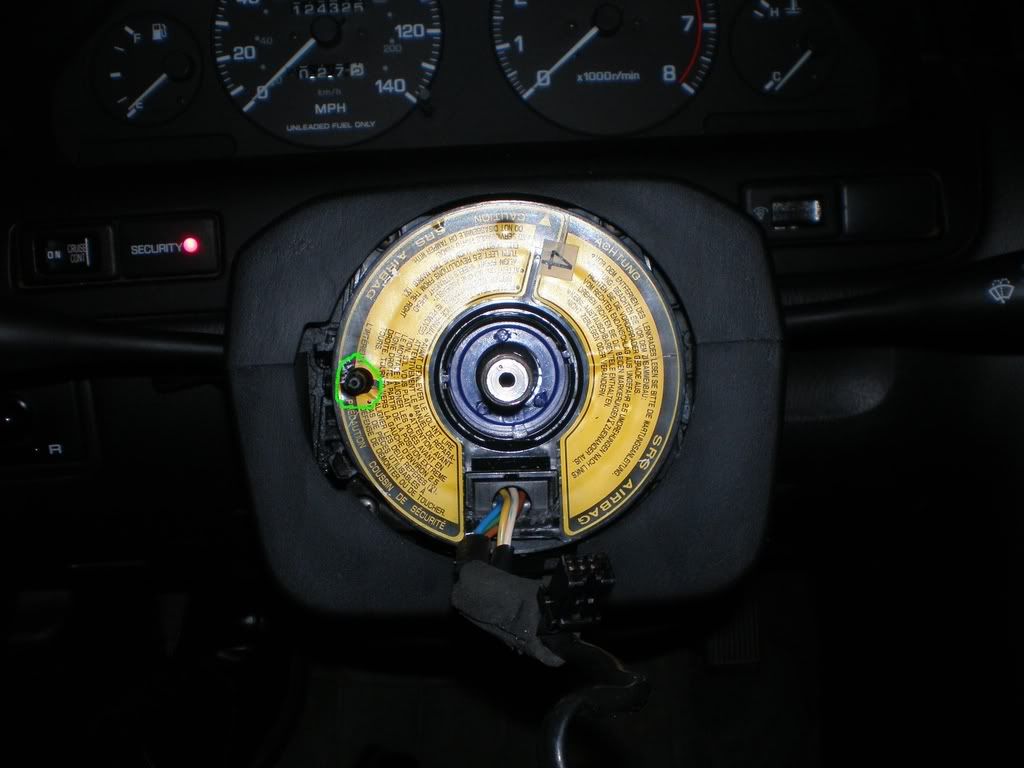 The area of the plastic square that must be trimmed is circled in purple. It now looks like a little step. The nub we drilled a hole for in the steering wheel is circled in green 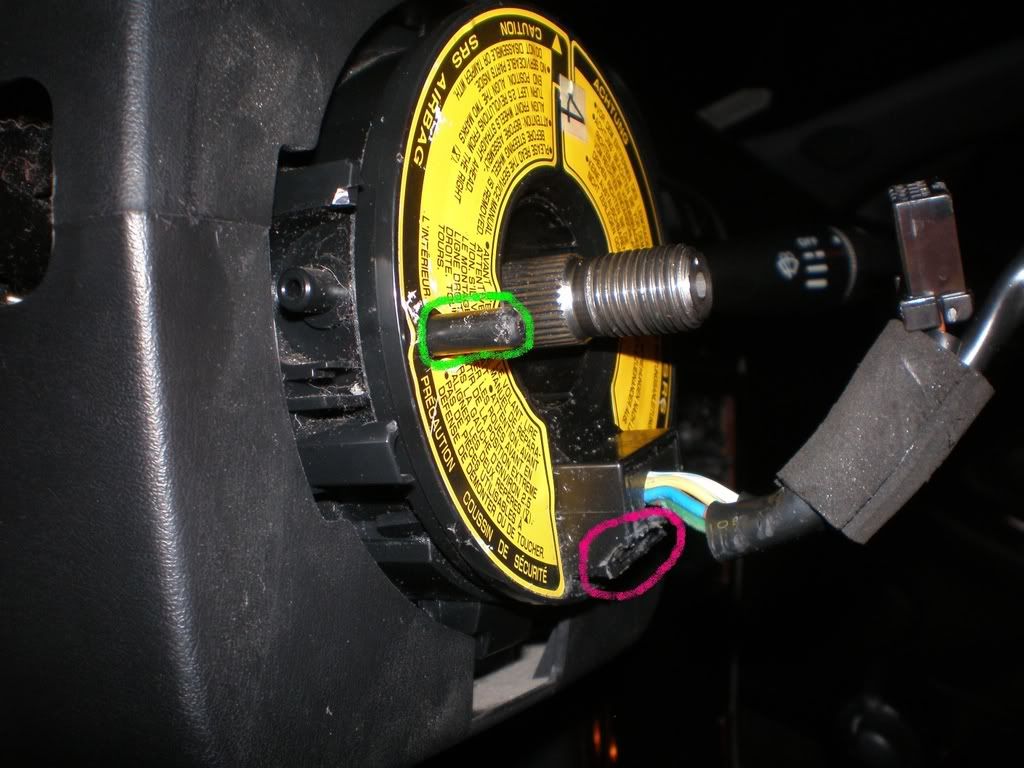 Voila! You have now slightly modified the 95/96 clockspring to fit the 97-99 steering wheel. 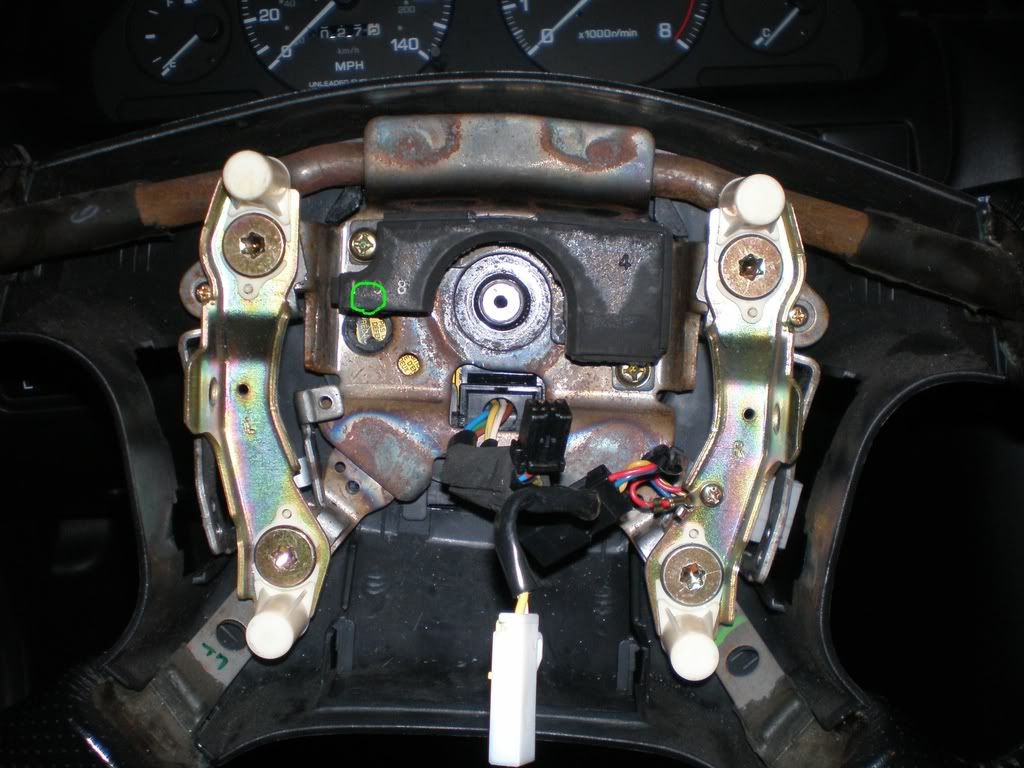 Run the airbag/cruise control wiring harnesses through the backside of the steering wheel and connect the 97-99 airbag harness and the cruise control harness. Use the T50 Torx bit to reinstall the Torx bolts to hold the airbag in place. Snap-in all of your black trim doors/covers around the steering wheel. Reconnect the battery and turn on the key. Your airbag light should come on and start flashing. Don’t worry! You just need to reset it.

TAKE NOTE THAT THE 95/96 CLOCKSPRING MUST BE SITTING IN THE CENTER POSITION WHEN MOUNTING THE 97+ STEERING WHEEL! IF NOT, THE CLOCKSPRING WON’T HAVE ENOUGH SLACK TO TURN FULLY LEFT OR RIGHT, AND WILL BREAK! I AM NOT RELIABLE FOR YOUR MISTAKES!

Here is the center position of the 95/96 clockspring on the hub. If you use the bottom square as your marking point, from this position, I can turn the clockspring about 2 full turns to the left, or 2 turns the right. This means that the clockspring will turn the full 2 turns, and start to “tense up” just as the square is about to go past this point a third time.

There you go. Patients and confidence will allow this to happen. Enjoy! 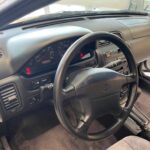 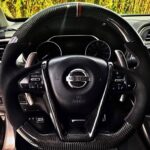