I have been battling a cylinder 6 misfire (P0306) for many months now. I have spent a lot of time on this website researching, but I can’t seem to find anything that works.

The problem: Intermittent misfiring on cylinder 6 that will come and go. It can switch from misfiring to not misfiring instantly. No change due to driving conditions. It happens on the interstate at 70mph, in neighborhoods at 25mph, and at idle. Some days it runs great, only misfiring for a short time, other days its a battle all day long. Sometimes it accelerates just fine, other times it misfires all the way. The idle is fine. Although it may misfire, the idle stays very normal, with no fluctuation.

I have checked the easy stuff already:

I have done all of the above, and none have made any difference in the misfiring. Always on cylinder 6.

I, fortunately, know a tech at the local Nissan dealership who also tested the wiring harness and intake plenum with similar results. He also flashed my ECU. He is now saying it’s the ECU because none of the other things have fixed it. His cost on the ECU is $650!

I called David from SpeedometerRepairGuy.com and explained what I needed and he said the ECU rebuild he does for Maxima’s wouldn’t fix my misfiring (only fixes damage from a bad IACV), also stating he had never heard of this problem before. Again, I have no problem with my idle.

Not sure what to try next. A friend of mine suggested the fuel filter, but the Nissan tech was adamant that it couldn’t be the fuel filter, also citing its a “lifetime” part. Thought about just changing it, since it’s so cheap anyway.

Any other ideas of things I should try before getting a new (or used) ECU? I have already purchased one used ECU through car-parts.com and it was bad, so I am 1) trying to avoid the hassle of trying to find a good used ECU and 2) trying to avoid spending $650+ on a new ECU from Nissan. After all, at this point, I don’t know it’s a bad ECU, it’s by deduction that I/we think its the ECU.

I replaced the ECU with a reman unit from the dealership and had them install and reconfigure everything. (I did this as I pulled my then current ECU out and it was clear that water had gotten into the unit and there was corrosion on the board plus my buddy the Nissan tech is usually spot on.) Didn’t misfire for a day, but its back with vengeance now.

Since the posts above, I replaced the spark plugs again with OEMs (had Auotlites before), and today I switched coils between the bad 6th cylinder and a good cylinder (2), and it still continues to misfire and throw a P0306.

What’s next? Switch out the injector again? I am second-guessing everything I have done now…

To follow up on this thread, I checked the compression (dry) and it was 125 across the board. Low, but not inconsistent which is good. Despite the Nissan tech’s advice to not replace the fuel filter (strainer) since it’s a “lifetime” part, I did anyway because it was a $13 part, easy to do, and $13 isn’t a lot to take a chance on in case it does work. I did both the compression test and fuel filter last Thursday (8/19/10) and it hasn’t misfired since. Unbelievable.

It started doing it on Friday 9/3/10. It went 2 weeks without misfiring, and started back again. The frequency seems to be less, however, it is throwing the P0306 code again (same cylinder as before). Since the problem started however long ago, it hasn’t gone that long without misfiring. It leads me to believe that its fuel-related somehow.

A friend suggested that it may be caused by a dirty fuel tank… reasoning that it ran fine for 2 weeks with a brand new fuel filter until it reached the dirty stuff in the tank. It did start misfiring just after I had filled up at the gas station (waiting in line for the car wash at the same station, actually). I just find it hard to believe that a dirty tank could do that and cause the exact same cylinder to misfire, but stranger things have happened.

Well, I got it figured out. There is something loose or a bad connection with the actual connector on the wiring harness which connects to the coil pack. Me and a friend of mine just starting wiggling all of the wires we could find after determining that it had to be something electrical related. By moving the connector itself a hair this or that way, I could cause it to misfire and then stop. We rigged it up to hold its place where it’s not misfiring:

So far so good. It has misfired maybe once or twice in the last week but it was literally just ones or twice and then it would be fine.My mechanic buddy at the Nissan dealership is going to replace it when he can find a spare. I know what you are thinking… Shouldn’t I have noticed this a really long time ago? Well, in hindsight, yes of course. But, it was one of those things that I took for granted and looked past. I never considered it could be something like that… 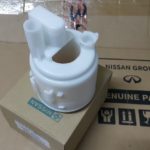 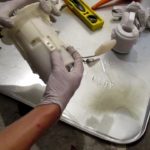