I took the Stillen Rear Sway Bar (RSB) off my ’99 Maxima before trading the car in and couldn’t wait to reinstall it on my 2002. I ordered new brackets from Stillen, because the trailing arms on the 2002 Maxima are much wider than the ones on my ’99, and the old brackets would not have fit properly. The bar itself can be reused.

I also bought all stainless steel hardware locally, to replace the Stillen hardware. For each side of the car you will need:

I found everything I needed in a West Marine store for very cheap. The stainless steel hardware will not rust as the Stillen hardware did after a few years. I reused the Stillen bushings after cleaning them up a little with a wire wheel. I also reused the original Stillen aluminum spacers and M6 bolts for the E-brake cable. This is how the trailing arm looks after removing the driver’s side wheel. The procedures are the same for both sides of the car. Remove the 10mm M6 bolt holding the E-brake cable to the trailing arm. Add the spacer and the supplied (longer) M6 bolt to hold the E-brake cable away from the brackets. Here are the Stillen brackets installed on the trailing arm. Note that the nub on the end of the clip that holds the E-brake cable has to be bent slightly to clear the bracket. Also note that the bolt closest to the brake line has been turned such that it faces towards the outside of the car. It does not appear as though the brake line would rub, as it is pretty far from the bolt, but it is always better to be safe than sorry! I used the 2 inner holes on the sway bar. Here is it mounted up to the car after all sides have been tightened. On the 2002 Maxima, Stillen recommends mounting the bar so that it lies right beneath the rear axle, however this is not easily done due to the positioning of the various ABS and E-brake brackets and clips, plus my bar was from a 1999 Maxima and Stillen is shipping bars for the 2000+ Maximas with extra holes (5 total) that allow it to be mounted right under the axle . My bar is mounted about an inch forward of the rear axle, which is fine. The further forward you mount the bar the more effective it is in the corners anyway.

The rear sway bar is one of the most effective suspension modifications you can perform on the Maxima. It virtually eliminates body roll during hard cornering and really tightens up the rear end of the car. 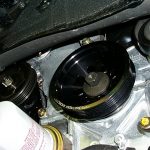 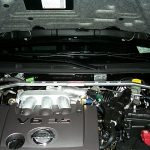