The track width between the 350z and Maxima was the exact same and was key to making this swap work. Also viable, using a seat from a B15 Sentra (00-06) – as these are a direct swap with 5/5.5 Max seats. Also, this guide is only if you have 2 manual front seat rails. All stock Maxima ’02/03 driver seats are power only but some ’00/01 Maxima driver seats are manual…I harvested a manual driver seat from a junkyard ’02 Sentra for the rail.

I studied the tracks for a while to see viable options and this resulted in my final procedure. By changing out the seat brackets my way, I lost about half an inch in sliding backward…not an issue for me and I’m 6’…but I also gained full functionality of the 350z seats. I also chose to go with the manual versions, so if you’re in there looking for wiring help – sorry but no, lighter is better for me.

The main tools you will need:

Start with the Z seats since they’re most likely not in the car when you’re starting. The process below is the same with the Z and Maxima seats EXCEPT the Z seats have a bracket alongside the inner edge that needs to be cut off. As seen here:

Now, the seats roll on a couple of rolling brackets, one in the front and one halfway down. The object of the drilling is to remove any kind of resistance the factory created in the rails to prevent the seats from rolling too far forward/backward.

There is a single aluminum welded bolt that can be drilled through on both rails in the front. These are present on the Maxima and the Z seats.

Once that is out of the way, you’ll see some ‘dimples’ in the rails. I believe my other set of rails had 6 total but these Maxima rails show 4 total. Drill those out.

Again, the main objective is to remove anything that will keep the rolling brackets from rolling too far forward. Once you have the front welded bolt and dimples out, you may notice it takes a little bit of force to get the rails to slide the rest of the way off. I found that the dimples actually still had a little bit of a ‘bump’ that needed to be removed.

The Z bracket on the side will still need to be removed before you can get to the dimples that it covers. If you don’t have a grinder I guess a Dremel would work, just very time-consuming. You could also take it to a muffler shop and ask to have someone safely cut the bracket off. Remember you still need the rails.

Once you’ve drilled all that out, the rails should slide off. Keep in mind the rolling brackets will come off. They aren’t hard at all to slide back on, you’ll see what I’m talking about when you’re there. To finish things off, you’ll need to transfer the seat belt lock from the Maxima seat to the Z seat. Just a simple bolt holds it on. (The Z seat belt lock doesn’t fit the Maxima seat belt)

Anyway, that’s pretty much it. When you have the Maxima rails onto the 350z tracks then it’s the 4 bolts to put the cushion back on and 4 bolts for the seatback. One last couple of notes, I lost the ability to raise/lower the driver seat…I don’t really care but some people might. Also, you CANNOT use the Z seat trim on the bottom NOR the Maxima seat trim. I’m not aesthetic so IDGAF what it looked like, the seats are comfortable as he11 to me.

If you have an ’02/03 Maxima driver seat then you’ll see its power. I ended up using a Sentra manual driver’s seat so I can’t help with that. Some ’00/01 Maximas came stock with manual seats as well, thanks MONTE 01&97 SE!. The power seat has a different setup, with a bolt that holds the rail on the motor ‘screw’ device on either side (see next pic). I’m sure there’s a way around it, I just didn’t deal with it. A driver-side manual Sentra rail from the junkyard cost me a whopping $30 so it was a non-issue to me. 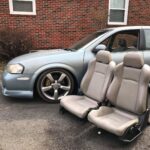 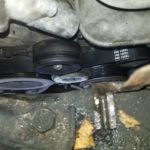